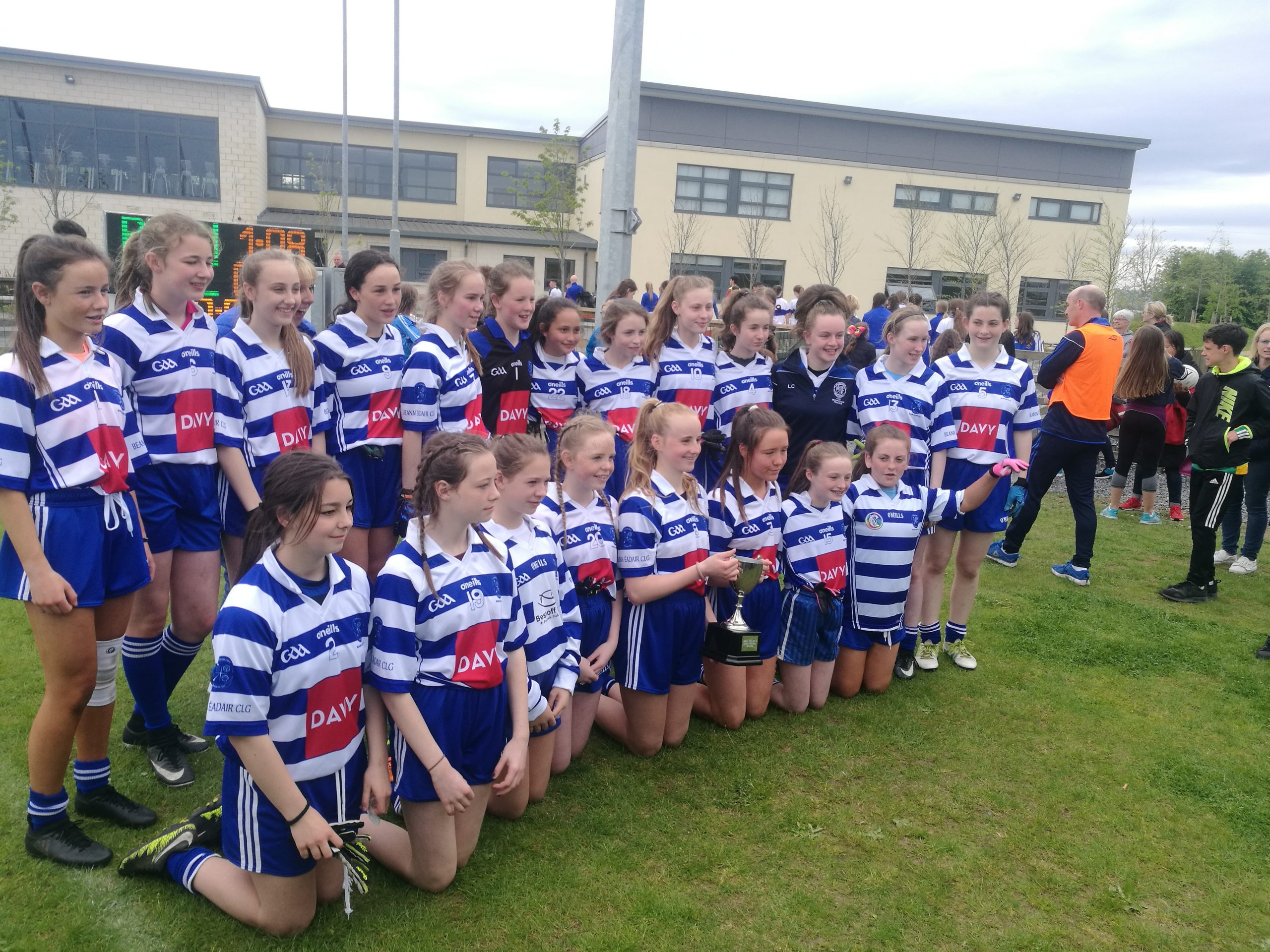 You wait 133 years to win a Feile and then 2 come along in 1 year! Following on from the success of the boys in the hurling Feile, the U14 girls team were crowned Division 2 champions after extra time after a monumental performance against St Vincents in the final.

It all started on Saturday in beautiful sunshine as Beann Eadair played host to Division 2 Group B, with visiting sides St. Oliver Plunketts, Cuala and St. Vincents all contesting for the 2 available semi-final places.

The Bens girls first match was against Plunketts. Playing with a wind advantage, the home side took an early lead, only for Plunketts to come storming back in the 2nd half. However, a strong defensive performance saw Beann Eadair safely through to the end on a score line of 3-3 to 2-3.

The second game saw the girls face Cuala, who had defeated the Bens in the league back in March. As in the league game, Cuala went into an early lead, but this time Beann Eadair were much the stronger team, and ran out comfortable winners 1-6 to 0-3.

The final group game was against St Vincents – as Vins had also won their first 2 games this match would decide who stayed in Howth for the semi-final and who had to travel to Naomh Olaf in Sandyford to play the winners of Group A. In a tough, tight encounter, Vincent’s withstood some late pressure to hang on to a one-point win, 1-3 to 0-5, with a couple of missed frees at the end proving costly. This meant a long journey over the M50 to take on Fingallians, who had emerged as easy winners of their Group.

The hour or so rest and the change of location must have suited the girls as they put in an incredible display of attacking football to win decisively on a score line of 7-3 to 1-7. Every time Fingallians looked to threaten Beann Eadair seemed to respond with a goal, with a huge travelling support cheering them on. The resillience of the girls in bouncing back so well from the disappointment of the Vincent’s defeat was remarkable.

It was a tired but determined group of girls that met up early in the club on Sunday morning to prepare for the final and a rematch against Vincent’s, who had came through their semi-final against Na Fianna after extra time. The team headed out to IT Blanchardstown prepared for another tough encounter but confident that they could over-turn the result from the group game.

And so it proved in the final – although it was a roller-coaster game that shredded the nerves of all the Beann Eadair supporters on the side-line. With both sides defenses  on top early on, and scores hard to get, Vincent’s took a lead into half time of 0-3 to 0-1. They extended their lead early in the 2nd half to 4 points,  0-5 to 0-1, but the Howth girls refused to be beaten. Ellen O’Shea scored a great goal to bring the gap down to a point. After a further exchange of scores, Vincent’s lead by 2 as the clock ran down. O’Shea slotted over a free to bring the margin down to a single score, and then showed unbelieveable composure to point an injury time free to take the game into extra time.

Visibly bouyed by their late comeback, Beann Eadair took an early lead in the first period of Extra time. However, were it not for a miraculous save by Amy O’Gorman in stopping a near certain goal things could have been very different. The 2nd Extra period remained equally tight, and with the Bens hanging on to a 1 point lead, Jane McGurrin made an absolutely heroic challenge that won her side a free that Ellen O’Shea again put over to secure a historic win.

The cup was brought back to Howth in triumph, and was presented to club chairman Kevin Kellett by joint captains Almha Fitzpatrick and Caitlin Contlon. What a weekend!

We use cookies on our website to give you the most relevant experience by remembering your preferences and repeat visits. By clicking “Accept”, you consent to the use of ALL the cookies.
Cookie settingsACCEPT
Manage consent

This website uses cookies to improve your experience while you navigate through the website. Out of these, the cookies that are categorized as necessary are stored on your browser as they are essential for the working of basic functionalities of the website. We also use third-party cookies that help us analyze and understand how you use this website. These cookies will be stored in your browser only with your consent. You also have the option to opt-out of these cookies. But opting out of some of these cookies may affect your browsing experience.
Necessary Always Enabled
Necessary cookies are absolutely essential for the website to function properly. These cookies ensure basic functionalities and security features of the website, anonymously.
Functional
Functional cookies help to perform certain functionalities like sharing the content of the website on social media platforms, collect feedbacks, and other third-party features.
Performance
Performance cookies are used to understand and analyze the key performance indexes of the website which helps in delivering a better user experience for the visitors.
Analytics
Analytical cookies are used to understand how visitors interact with the website. These cookies help provide information on metrics the number of visitors, bounce rate, traffic source, etc.
Advertisement
Advertisement cookies are used to provide visitors with relevant ads and marketing campaigns. These cookies track visitors across websites and collect information to provide customized ads.
Others
Other uncategorized cookies are those that are being analyzed and have not been classified into a category as yet.
SAVE & ACCEPT
Powered by